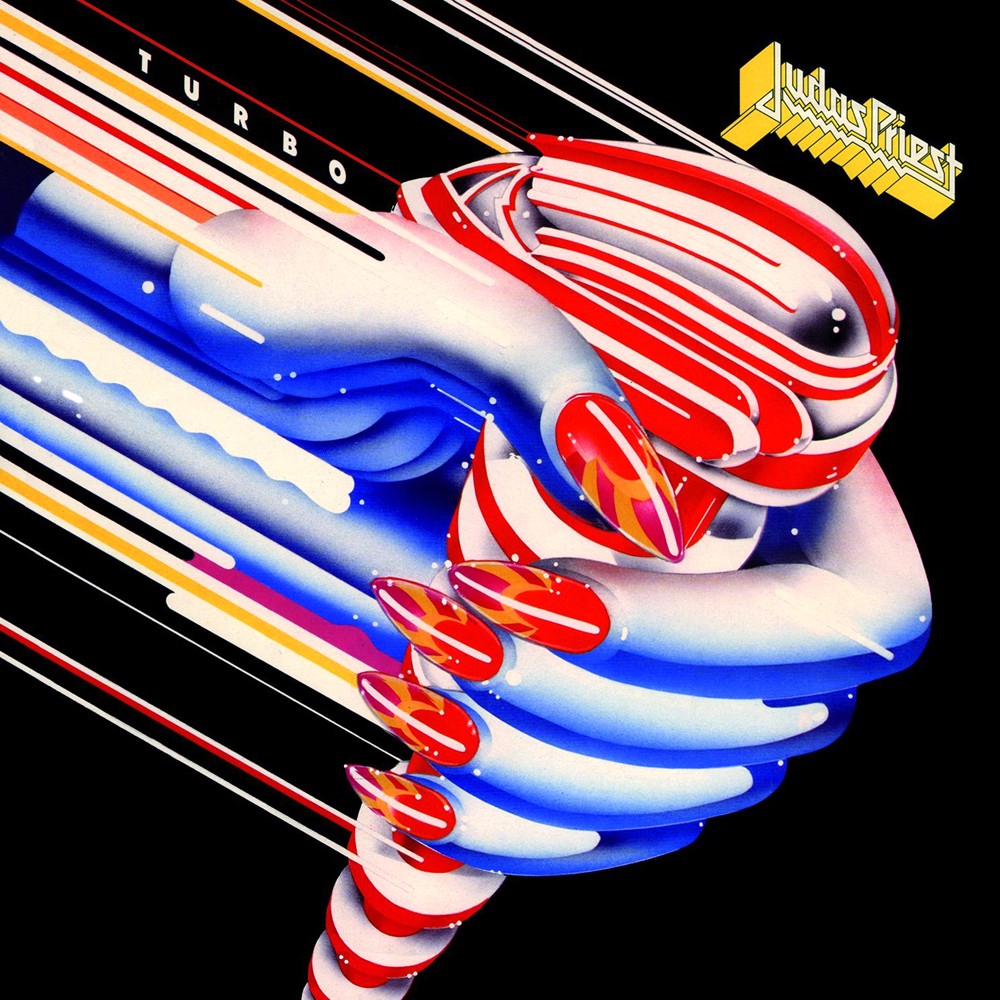 I know, I know, you’re all probably taken a bit aback at the sight of Judas Priest’s “Turbo” receiving a main entry in this project; after all, even though Priest is one of THE most influential and beloved metal bands of all time, this is still generally considered to be one of their very worst albums. It is definitely my personal least favorite out of their classic run of records from ’76-’90, and the only album you’ll likely to see both in the Golden Age of Metal and on this list as well. But, despite the genre peaking this year, I wanted to write about more than just thrash records for ’86, and despite its fundamentally non-essential nature, I chose “Turbo” because I felt it was the best representation of the larger trend towards the mainstream going on within the “old guard” of metal artists in ’86, contrasting the new heights/extremes the young guns were reaching that year, and coinciding with the rise of the “hair” bands as well (but more on that later).

Anyway, as for “Turbo” itself, it came about as a result of Priest taking what was initially going to be a double album and splitting it up, with the more aggressive material being released a couple of years later on ’88’s “Ram It Down”, with the more commercial songs becoming “Turbo”, which definitely got the short end of the stick on that deal. Not that this is some sort of “St. Anger”-level disaster or anything, and the band had gone in relatively radio-friendly directions with their sound before, like on the stone-cold classic “British Steel”, but “Turbo” took that aspect of their sound way, WAY too far, with its instantly-dated, reverb-heavy drum production, cheesy, trend-hopping abuse of synthesizers, and light, poppy songwriting that came uncomfortably close to becoming the dreaded glam metal. Sure, Tipton & Downing’s solos still sound awesome here, and Halford’s vocals are still as great as ever (of course), but they can only do so much to salvage the record, so, to paraphrase Tropic Thunder; Priest, you went full 80’s here… never go full 80’s. 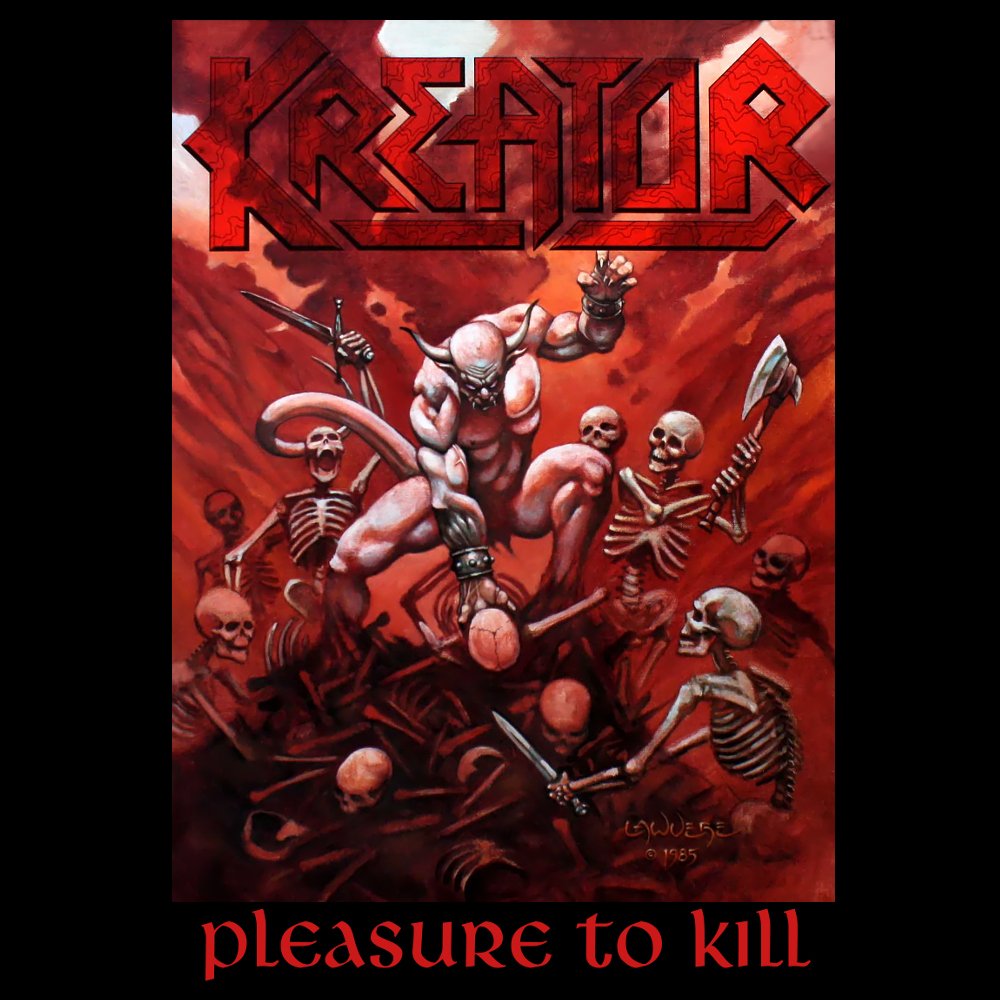 While the very early days of thrash were more or less dominated by the big American acts, it didn’t take long before the Teutonic scene soon arose as a strong rival in Germany, and Kreator’s sophomore effort “Pleasure To Kill” quickly established the band as THE undisputed kings of German thrash. I mean, just think about it; this record came out in ’86, but you wouldn’t know it judging from the way it sounds, with its incredibly rough, brutal production, the bloodthirsty, Faces of Death-inspired lyrics that all graphically detail a different way to die on each and every song, Mille & Ventor’s throat-shreddingly harsh grunting, and the relentless, chaotic, merciless riffs that are as face-smashingly blunt as they are blisteringly fast, which means that “Pleasure” might just be one of the first classic death/thrash records ever released, combining the latter style just as it was peaking with undeniable elements of the former, back when death metal barely even existed!

If that isn’t trailblazing, I don’t know what is, and as mind-blowingly extreme a thrash record that fellow ’86 classic “Reign in Blood” still is to this day, “Pleasure To Kill” still manages to outdo that classic in that regard, as far as I’m concerned (but, more on that later). So, if the first thing that comes to mind when you think about Kreator are their later, more restrained (though equally awesome) records, then you’re in for a pleasant shock with “Pleasure”, as, from the eerily placid synths and hellish whirlwhinds of “Choir of the Damned” to the final eardrum pulverizer that is “Under the Guillotine”, listening to this record is like being sucked for 30+ minutes into the blinding, nightmarish vortex of blood & gore that constitutes its cover art, with absolutely no relent or mercy at all; pleasure to meet you, Kreator! 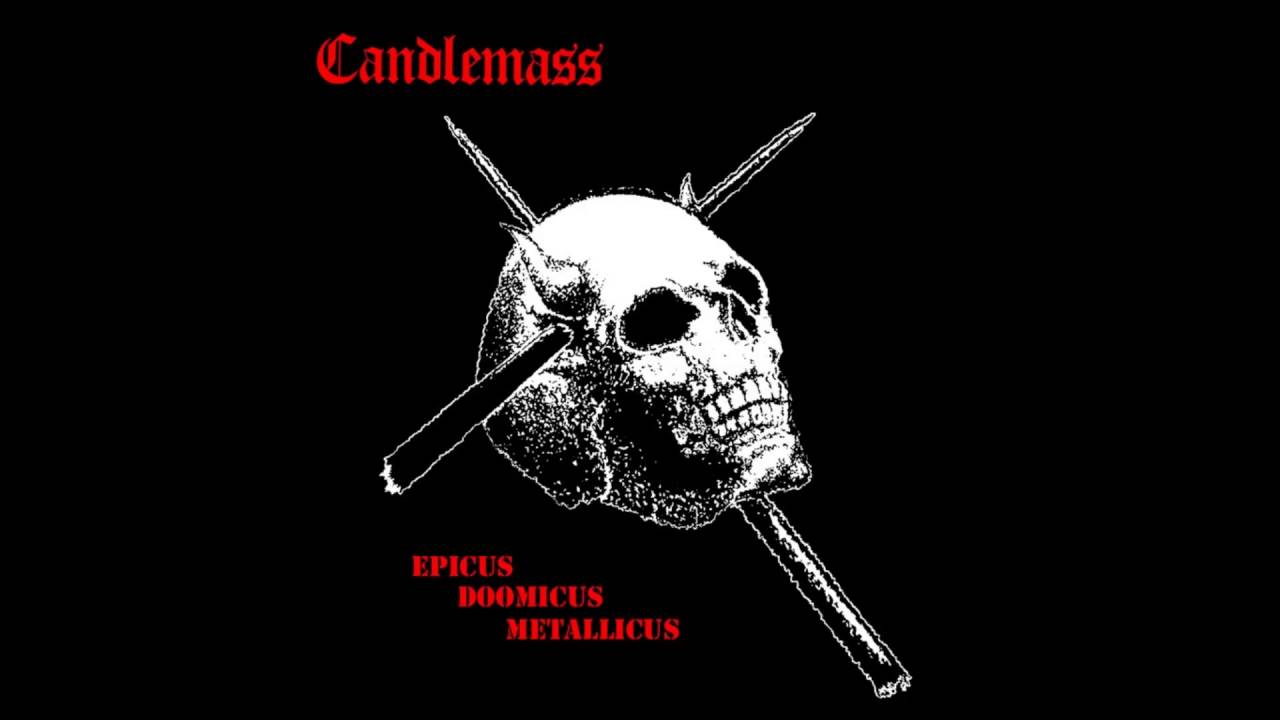 As I’ve always established earlier in this project, doom metal was already a “thing” well before ’86, but none of the records by the other early acts made as big an impact on the genre as “Epicus Doomicus Metallicus”, the debut of Sweden’s legendary Candlemass, which set them up to be THE premier band in the genre by a long shot. I mean, the name of the album itself literally is Dog Latin for “epic doom metal”, and epic doom it is indeed, from the mournful acoustic guitar & eerie, gothic synthwork of the intro on album opener “Solitude”, which is soon joined by Johan Längquist’s wonderfully sorrowful, melodramatic vocals (making this his only recording with the band until just this year, unfortunately), just before that almightily HEAVY, dread-laden riffing crawls it way in, and lets the whole metal world know that doom is here to stay for good, baby.

And from there, “EDM” stays just as awesome, whether it be in the form of band mastermind Leif Edling’s incredibly dark, occult-obsessed lyrics, the songwriting’s overwhelming sense of all-around epic scope, or of course, those absolutely grueling, punishingly slow and THICK effin’ riffs, which helped to set the sound of doom in stone for forever. And, while Doomicus was only the band’s first record, it was still so good that it made its way onto our old Best Debuts list, and for very good reason, so all I really have left to say here is, feeling an impending sense of DOOM for the better part of an hour never sounded this good, huh? 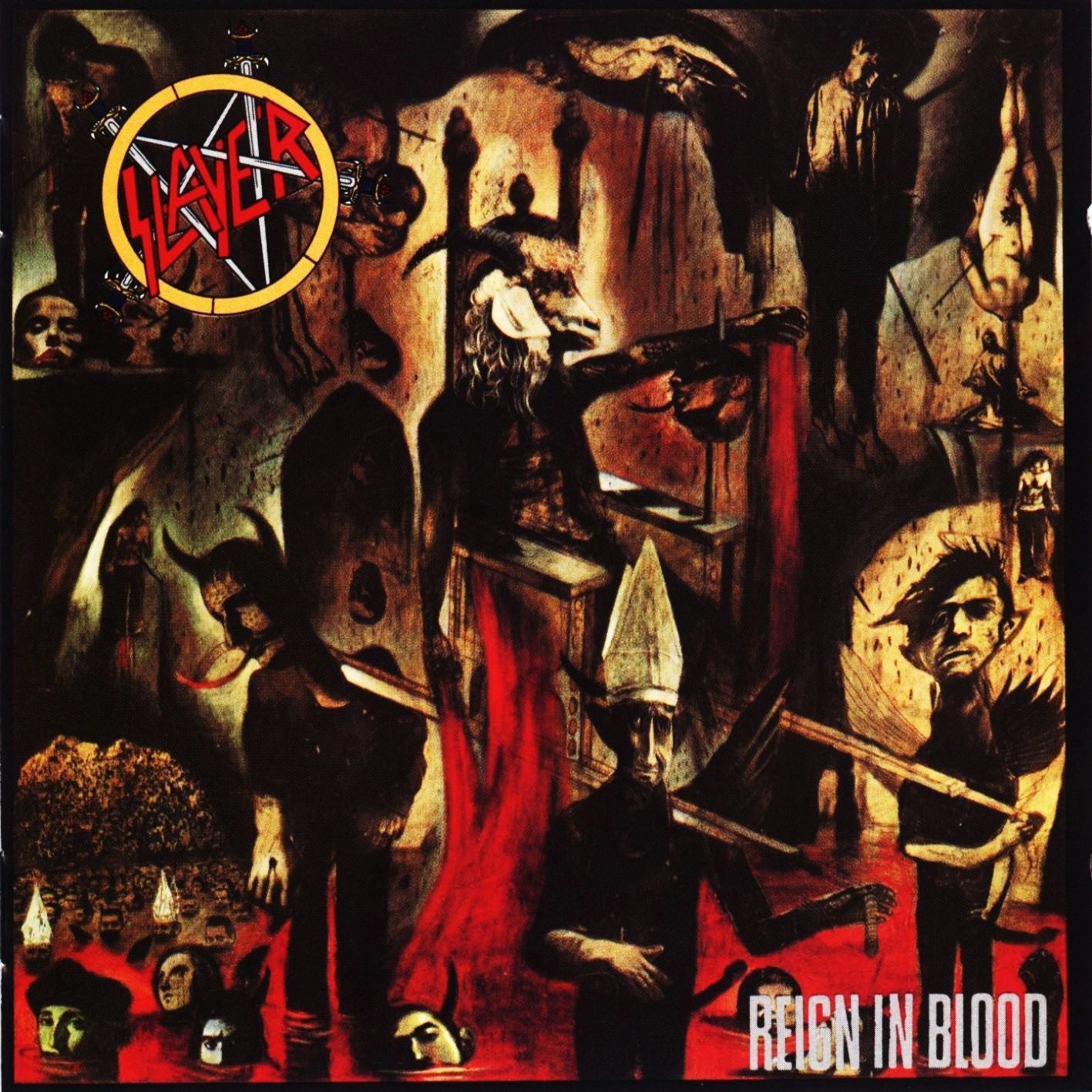 Another entry for ’86, another one of the most iconic metal records ever released (sensing a trend with this year?), with Slayer’s “Reign in Blood”, which saw the band go from being a burgeoning underground phenom to officially becoming LEGENDS, as they took the inherently intense essence of thrash and distilled it down to its cleanest, purest form, doing so by (ironically) taking particularly heavy influence from hardcore punk with the album’s songwriting, often disregarding repetitive riffing and formulaic verse-chorus-verse structures in favor of sudden, chaotic tempo changes and sheer, violent velocity performed at an average tempo of over 150 beats per minute, as Hanneman & King’s riffs and solos relentlessly shred and wail away at your eardrums, Dave Lombardo abuses his legendary double bass without mercy, and Tom Araya’s bloodily graphic tales of genocide, serial killers, and warring against Heaven itself are vocalized with his combination of maniacally frantic, shouted rantings and iconic, Halford-inspired falsettos.

It’s basically one long, non-stop, sub-half hour thrashjaculation, with just enough variation in tempo thrown in to keep from being too tiresome, which lets the fundamental intensity leave all that more of an impact. Granted, besides the longer, more intricate tracks like the iconic album bookends “Angel of Death” and “Raining Blood”, most of the songwriting here isn’t particularly “ambitious” in the traditional sense of the term, but what “Reign” lacks in scope, it makes up for with sheer, naked aggression, and songs that might’ve sounded sloppy or half-baked from other bands just sounds amazing in Slayer’s bloody hands. Combine that with producing legend Rick Rubin removing most of the 80’s-style reverb that had characterized the band’s sound up to this point, and replacing it with an incredibly sharp, punchy production all-around, and you have an album that’s still one of the most extreme thrash records ever all these years later, and one of the unholy best as well; may the blood forever rain! 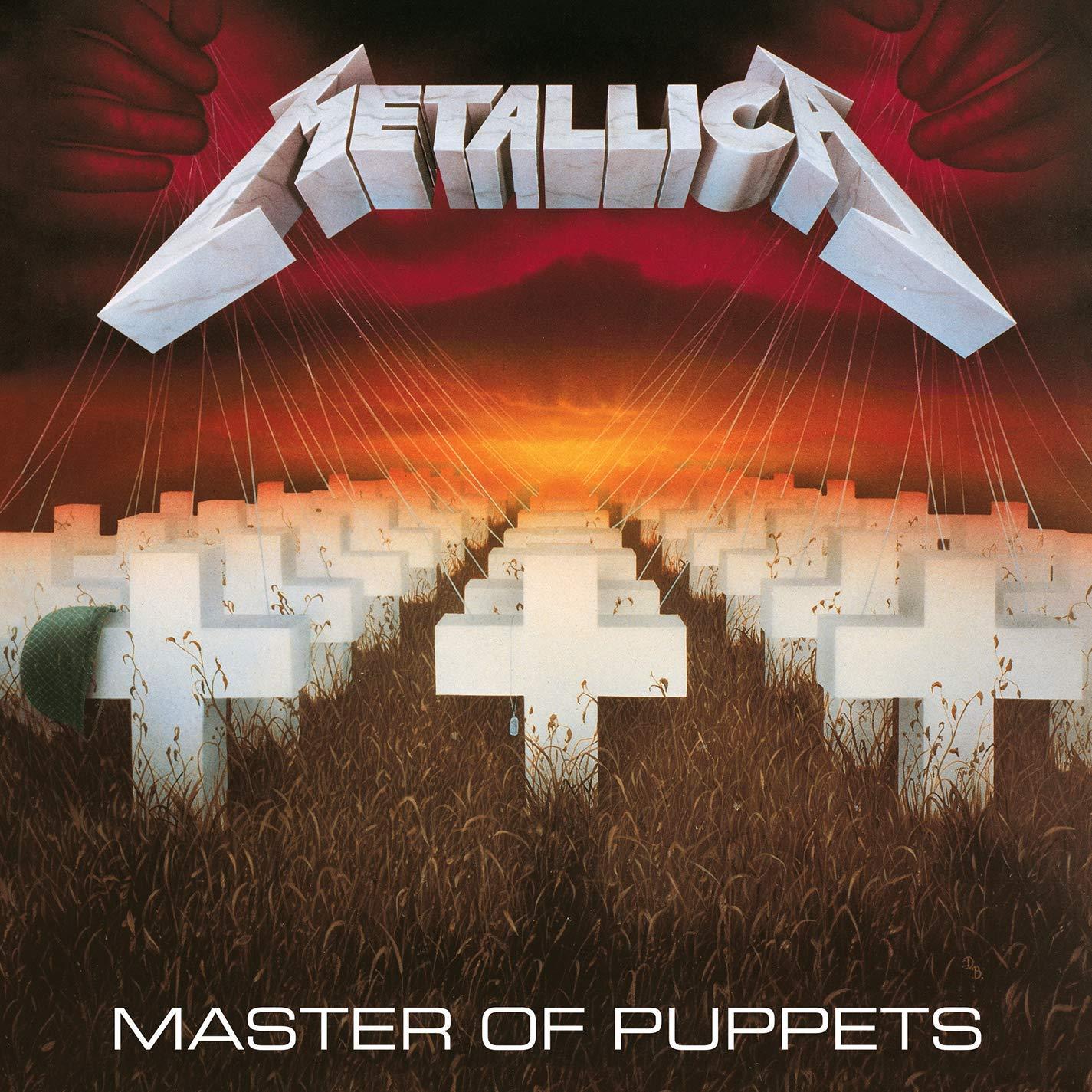 With Metallica’s “Master of Puppets”, we come to what is arguably the most iconic thrash record from ’86, which, seeing as how it’s arguably the most important year in the history of the genre, is really saying something. But, “Puppets” more than earns that lofty status, representing the band at their peak as they built on the already incredible foundation of “Ride the Lightning” to create a somehow even greater album, perfecting their astonishingly ambitious spin on thrash with the combination of Hetfield’s amazing riffage that maintains an impossibly perfect balance between irresistible catchiness and sheer aggression, the essentially flawless Flemming Rasmussen production, Cliff Burton’s seminal, virtuosic basswork, the album’s sophisticated lyrical motifs on the various forms of societal manipulation, whether it be drug addiction, organized religion, or the barbaric, dehumanizing horrors of war, or the epic, impeccably formulated songwriting that maintains an immaculate, absolutely peerless overall flow, with basically not a single individual riff, solo, or transition here sounding like anything less than complete and utter perfection.

From the elegant intertwining of the Morricone-inspired Spanish guitars on “Battery” to the slow, twisted Lovecraftian pummeling of “The Thing That Should Not Be” to the soaring, spacey atmospherics of “Orion”, this is, as far as I’m concerned, THE #1 thrash album of all time, as well as just one of my favorite metal records, period. Sadly, as well all know, tragedy would strike the Four Horsemen later that same year in the form of Burton’s tragically premature death, but “Master of Puppets” still stands unsullied apart from that tragedy as a monumental record that hasn’t aged a day in the 20+ years since I had the pleasure of listening to it for the first time, one that will always be an untainted representation of Metallica at the absolute height of their skills and sophistication for all eternity; OBEY YOUR MASTER!

Other Notable Metal Releases from ’86:

While “Turbo” is obviously the foremost example from ’86 of a classic metal act flirting with the mainstream, it’s certainly not the only one, whether it be Ozzy Osbourne’s more radio-friendly “The Ultimate Sin”, or Iron Maiden’s “Somewhere in Time”, which was also that band’s first attempt at integrating synthesizers into their sound (although many, myself included, would agree that they pulled it off with much greater success than Priest did). Besides that, we continued to see more mehtastic glam metal in the form of Poison’s “Look What the Cat Dragged In”, Bon Jovi’s “Slippery When Wet”, or Europe’s “The Final Countdown” (doodoodoodoo!), some notable releases from early progressive metal pioneers like Fates Warning’s “Awaken the Guardian” & Queensrÿche’s “Rage for Order”, and a number of other significant metal records such as Motörhead’s “Orgasmatron”, Manilla Road’s “The Deluge”, and King Diamond’s classic debut “Fatal Portrait”.

But, of course, thrash was the genre that completely dominated the metal year, as, if we only saw the releases of “Pleasure”, “Reign”, & “Puppets” in ’86 alone, it would already be in the running for the greatest year in the history of the genre, but when you add in Metal Church’s “The Dark”, the debut records from both Nuclear Assault and Flotsam and Jetsam in the forms of “Game Over” & “Doomsday for the Deceiver”, more classic German thrash with Destruction’s “Eternal Devastation”, as well as Dark Angel’s “Darkness Descends” AND Megadeth’s “Peace Sells… But Who’s Buying?” (and all that’s with me leaving a couple of records out, even!), and the year’s status as the undisputed peak of that particular sub-genre is cemented for all eternity, as far as I’m concerned; if you don’t agree, too bloody bad.

This entry was posted on May 10, 2019 by Stu in Year in Review and tagged Candlemass, Golden Age Of Metal, Judas Priest, Kreator, Metallica, Slayer.

The old forums
(until they die)